Baba Ramdev’s business genius in launching and driving swadesi, ‘Made in India’ products is still being analyzed by business leaders and students of business alike. The Yogi turned business magnate has skillfully introduced and nurtured a series of products that take on well entrenched players in the Fast Moving Consumer Goods (FMCG) space including Unilever, Nestle, Britannia and even Dabur among others.

Behind a folksy, homegrown veneer, Ramdev and his trusted lieutenant Acharya Balkrishna, (managing director of the company) operate a rather strong and serious business.

“According to CLSA and HSBC, Patanjali is the fastest growing FMCG company in India. It is valued at ₹30 billion (US$470 million) and some predict revenues of ₹5,000 crore (US$780 million) for the fiscal 2015–16. Patanjali declared its annual turnover of the year 2016-17 to be estimated ₹10,216 crore (US$1.6 billion). Ramdev baba has stated in his interview with CNN-News18 that profit from Patanjali Products goes to charity.” – Wikipedia

Continuing with a tradition of pandering to emerging desi nationalist sentiment, the company has launched a campaign with “appeals on 71st Independence Day to all Patriotic Indians (facebook)” 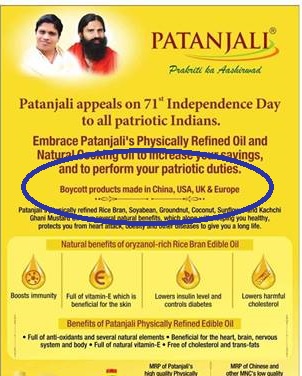 Patanjali products also seem to be a hit with Non Resident Indians (NRIs) and the Indian Diaspora.

Baba Ramdev and his associate Acharya Balkrishna of consumer goods company Patanjali are working on a unique form of renewable energy: Bull power.

Research of over one and a half years on the idea to generate electricity with the aid of a bull’s pulling power has yielded initial success. The aim is to ensure that the animals don’t get sent to slaughter.

The experiment is the brainchild of Balkrishna, managing director and primary stakeholder of Patanjali, and involves a leading Indian multinational automobile manufacturer and a Turkish partner. A prototype has been designed and is being tweaked to generate more electricity.

So far the design, involving a turbine, has managed to yield nearly 2.5 kilowatts of power, said those aware of the research project.

“At a time when more and more male bovines are being slaughtered, we want to change the perception that they (bulls) are not very valuable,” Balkrishna told ET, confirming that Patanjali is conducting research on this at its sprawling Haridwar headquarters “While in the morning they can be used in the farms, in the evening they can be utilised for generation of electricity.”

The article and the interesting headline leaves a lot to our imagination, especially since the technique is unproven and hasn’t been demonstrated at scale. If it does succeed, it will be an interesting innovation to watch.
You may also be interested in a more detailed feature on Patanjali (link) including articles on growth of its brand and going global.

Other articles on this topic: