The USCIS announced that

“On April 5, 2019, USCIS reached the congressionally-mandated 65,000 H-1B visa regular cap for fiscal year 2020. USCIS will next determine if we have received a sufficient number of petitions to meet the 20,000 H-1B visa U.S. advanced degree exemption, known as the master’s cap.

USCIS will continue to accept and process petitions that are otherwise exempt from the cap. Petitions filed for current H-1B workers who have been counted previously against the cap, and who still retain their cap number, will also not be counted toward the FY 2020 H-1B cap.” 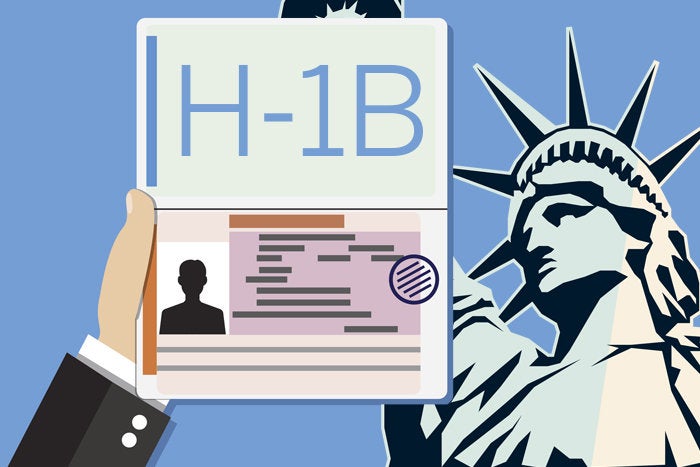 According to a research report by CARE Ratings, the total number of H-1B applications approved to the top five IT majors — TCS, Infosys, HCL, Wipro and Tech Mahindra — stood at a mere 22,429, down from 43,957 in 2017, amid the rhetoric against immigrant workers by the Trump administration.

In FY18, a total of 331,098 H-1B petitions were approved and companies with the highest number of approvals were Cognizant Tech Solutions US Corp, TCS Ltd, Infosys Ltd, Deloitte Consulting LLP and Microsoft Corporation, which cumulatively received 33,576 approvals.  However, the number of approvals reduced by 11%, from 37,393 in FY14.

A few key highlights from the report

“We are going to enforce the Hire American rules that are designed to protect jobs and wages of workers in the United States.  We believe jobs must be offered to American workers first.  Does that make sense?   Right now, widespread abuse in our immigration system is allowing American workers of all backgrounds to be replaced by workers brought in from other countries to fill the same job for sometimes less pay.  This will stop.  American workers have long called for reforms to end these visa abuses.  And today, their calls are being answered for the first time.  That includes taking the first steps to set in motion a long-overdue reform of H1B visas.

Right now, H1B visas are awarded in a totally random lottery — and that’s wrong.  Instead, they should be given to the most-skilled and highest-paid applicants, and they should never, ever be used to replace Americans.  No one can compete with American workers when they’re given a fair and level playing field, which has not happened for decades.”

The order by itself was not very prescriptive. This seems to be one of the executive actions that signals more changes coming down. So what does this mean to H1 Visa aspirants around the world?

After Trump’s “Buy American, Hire American” order, “there could be an issue even getting fresh H-1B visas. The order is also likely to hit visa renewals.

What does this mean to most H1 Visa aspirants?