Here we present a review of new book ‘Transit Lounge’ by Myra Gupta .

You’ll learn what spices work best for bringing out the natural flavors of popular Indian ingredients, as well as the techniques employed by the most discerning Indian cooks, from international superstar Indian chefs, to the most experienced home-cooks in Mumbai.

The best part is that these recipes are easy to prepare at home in your slow cooker. The slow cooker is one of the healthiest appliances you can use to cook at home, and its “low and slow” style of one pot cooking lends itself perfectly to the demands of top-notch Indian cuisine. With 100 recipes there is something for everyone, from quick and spicy lunch dishes for one, to elaborate Indian feasts for the whole family, you’ll be equipped with everything you need to produce truly world class Indian meals at home every night of the week. The Indian Slow Cooker Cookbook is your all-in-one resource for enjoying the very best of South Asia wherever you are in the world!
This Indian Slow Cooker Cookbook contains:

Review by our Editor on Amazon:  “Yet another cookbook for DIY on Indian Cuisine”

I happened to come across the book while reviewing recent Kindle publications and was intrigued: was this yet another cookbook on Indian cuisine?

The title of the book is a mouthful though it describes what it is all about “Top 100 Indian Slow Cooker Recipes from Restaurant Classics to Innovative Modern Indian Recipes All Easily Made At Home in a Slow Cooker.” The sections of book are well written and follow a predictable format:
– Time to cook
– Basic ingredient list
– Recipe
– and ends with informative tips on calories, fat, Carbs, Sugar, Protein and Cholesterol

A+ for painstaking collation of information. Perhaps a few pictures of the dishes would be a nice addition.

From the book blurb

The Bounce! is a human-interest story that chronicles the life and adventures of a computer programmer, Raj, as he migrates across four countries spanning three continents. The first half of this engaging story is about Raj’s experience seeking love by moving back from America to India, eventually migrating to Canada with his new bride. During their journey, the couple experiences a tragic loss onboard an international flight.

The second half of the book chronicles the protagonist and his wife bouncing back. It is a story of love, loss and the life of an Indian American who happens to be an accidental beneficiary of globalization and offshoring.

The author’s delicate narrative is, in essence a tragedy to triumph story that should appeal to everyone seeking their inner-hero.

The Bounce! gives an insight into the world of our educated, but globally transient workforce: how immigrants fit into American culture and communities, build their own away-from-home communities, and how they struggle with the age-old immigrant’s dilemma: balancing the adopted worlds’ needs against traditional values and cultures.

The book has 39 reviews on Amazon.com , and the top reviewer posts  :

5.0 out of 5 stars  Absolutely Beautiful!

It is hard to find words to describe a story like the one that is shared in this book. Based on a true story and written in the first person, it is easy to feel deeply what the protagonist feels as he journeys (literally) through life. As one reads it is easy to feel the young Raj’s initial lightness as he works towards acquiring a green card and pursuing a successful career in the IT world while looking for love. His reserved joy at receiving his green card and the contrast made to the Indian youngsters seen in Bollywood movies, where dancing and singing are commonly observed, had me smiling as I read.

Raj’s initial humor and joy/hope for the future is heavily contrasted with the unthinkable tragedy he later experiences, yet themes of hope are strong throughout the book. The theme, “live in the present,” is subtly woven throughout Raj’s road to healing and hope after heartache. The reader is allowed to experience the whole spectrum of human emotion — humor, joy, love, hope, sorrow, shock, anger and ultimately revelation. These emotions are interwoven with fascinating revelations about various parts of the world, such as Switzerland, Canada, India, and parts of the United States.

This book is perfect for anyone who has experienced love, loss or both. It is especially powerful for those who may have lost a loved one well before it was thought possible. The ending is a poignant testimony to the God-given ability to not only survive a terrible loss, but to thrive as well. This short story was simply put – beautiful. I absolutely loved it and would not wish for any portion to be omitted. I would have loved a few more minutes with Ajay at the end, though!

eCommerce in India has taken off in a big way. Here is a sale of interest to Indian consumers and those looking to gift items to their Indian relatives and friends.

‘We Are One’  is a nice book that celebrates diversity in America, especially focused on South Asian toddlers and kids.

Pinky Mukhi, like many Indian mothers in North America began fielding questions from her curious toddler. While answering the questions, the Indian American author was inspired to convert the idea into an illustrated children’s book.

‘We Are One’  is a nice children’s book that celebrates diversity in America, especially focused on South Asian toddlers and kids.

The protagonist in the simple story, Mintu is curious and observant, and nothing misses his eyes. He wants to be a soccer player. However, Mintu also realizes that he is different from his American friends. His parents spoke Gujarati at home and his mother made parathas .

Mintu was planning to invite his friends home and was concerned his friends would find him strange for liking parathas. “It smelled, looked, and tasted different from the foods he saw his friends eat.” The narrative builds on from this point with a nice happy ending.

Inspiration for the book

We asked the author, Pinky for her motive behind writing the book:

“I am Indian Mother of a six-year-old curious and observant boy who finds his food, language and culture different from his friends at school and discusses these differences with me at home. He also at times feels food shame. I have written this Children’s book which deals with cultural and physical differences and reveals the secret of oneness despite the differences.”

Here is a review of a recent book by Indian American author GV Rama Rao, a retired Commander of the Indian Navy. 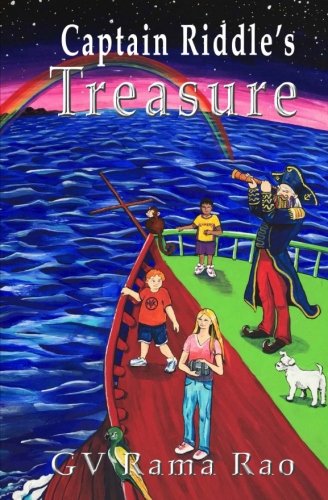 The young-adult fiction, “Captain Riddle’s treasure” an interesting book that children and their parents are bound to enjoy. In the book, Rao skillfully weaves humor and action to keep readers engaged.

The story is that of three kids who have been punished for fighting with their siblings. Banished by the Night Fairy to a deserted island, they must find their way back home using their wits.

Rao draws on his seafaring experiences to imagine the adventures the children might encounter during a voyage onboard a one-of-a-kind ship. The book also has a healthy dose of pirates, leprechauns, a fire-spewing dragon, a knight astride a lion, and the Night Fairy herself; enough to keep any child imagining the art of the possible.

More details of the book on GaramChai.com | You may also be interested in the Books section of GaramChai

American e-commerce giant Amazon, that is ramping up its presence in the Indian video streaming space through Prime Video, announced yet another Indian original series based on Subhas Chandra Bose’s Indian National Army (INA). The series will be directed and produced by Kabir Khan, who has to his credit movies like ?Ek Tha Tiger?, ?Bajrangi Bhaijaan? and ?Kabul Express?.

The Forgotten Army (working title) will be Khan?s debut in OTT digital video services and is scheduled to start production by the end of 2017.

Our aim is to build a compelling lineup of Indian shows, working with the greatest talents from the industry. Our association with Kabir Khan is one of the many such partnerships that India will see

Amazon Prime Video provides greater access to reach new and vast Indian audiences. They are also bringing in global talent and knowledge to collaborate with Indian scriptwriters and content creators to further hone their skills and know-how. The web series has a scale and reach far greater than any Hindi film.

Media references to the announcement