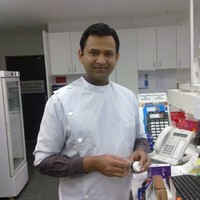 The recent Australian bushfires have devastated communities across the region, leaving people without homes and basic necessities.

Raj Gupta’s home went up in flames during recent NSW South Coast bushfires and his town of Malua Bay remains severely damaged, without power and mobile service. However, Gupta continues to run the small pharmacy there, dispensing medicines and essentials to those who need it.

This pharmacist in Malua Bay, NSW is keeping his doors open for patients, despite losing his own home to the bushfires #AustraliaBurning pic.twitter.com/W6CD19NWI5

According to news accounts,

The 52-year-old pharmacist is now staying in emergency housing at nearby Batemans Bay, but is continuing to travel back to Malua Bay to keep the pharmacy open.

“We can’t take payments, but that’s not much of a concern. I’ve had my patients come in and say they’ve not only lost their house and their belongings, but also their medication,” he said.

Mr Raj Gupta was born in India and came to Australia 28 years ago. The father of two moved to Malua Bay seven years ago for semi-retirement.

The story of Indian-Australian Pharmacist Raj Gupta who lost his home in the bushfires but is still dispensing prescriptions is heartening indeed.