Turns out “Sake Dean Mahomed was an Anglo-Indian traveller, surgeon and entrepreneur who was one of the most notable early non-European immigrants to the Western World. He introduced Indian cuisine and shampoo baths to Europe, where he offered therapeutic massage. He was also the first Indian to publish a book in English!” (Wikipedia) 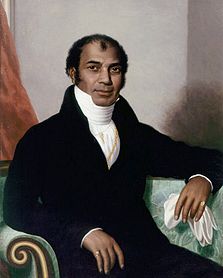 BBC – Beyond the Broadcastran an interesting feature “Brighton, or Brighthelmstone as it was then known, was a developing resort in the 1770s and ’80s when an Indian, Sake Dean Mahomed, arrived to open Mahomed’s Indian Vapour Baths on the seafront, on the site of what is now the Queen’s Hotel. These were Turkish baths in which clients were put in a flannel tent and massaged by someone who poked their arms through slits in the flannel walls. Mahomed was known as a ‘shampooing surgeon’ – shampooing referred not, in the modern sense, to washing the hair, but to massaging the body during a vapour bath”